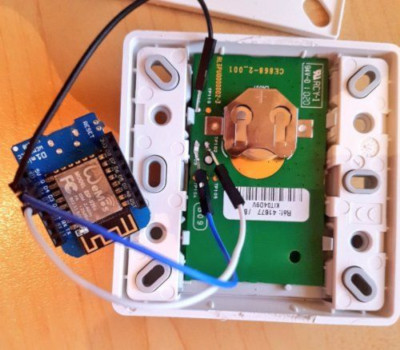 After poking with a multi-meter it appears that two test points are connected to the right signals:

The signal is active low: there is a pull-up resistor and it must be grounded to simulate the activation. A 680 Ohm resistor is used in series with each button of the remote to prevent current overshoot and maybe reduce power consumption, so I also used them: 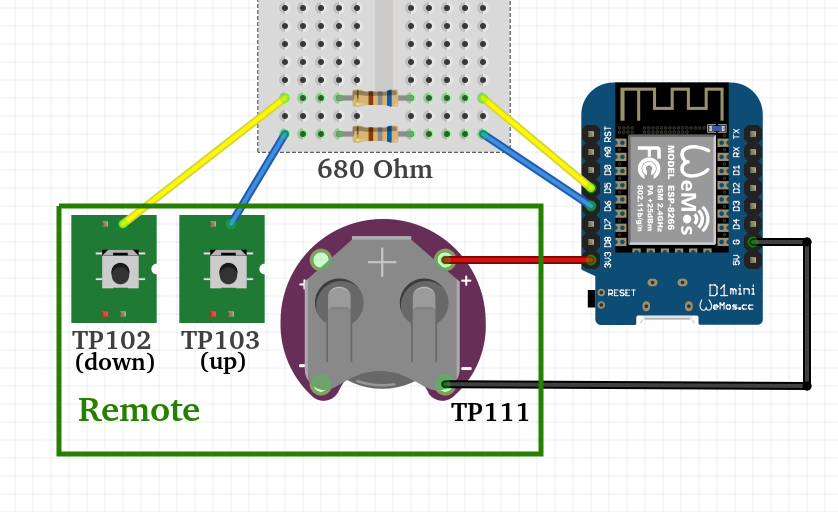 You might not see the resistors on the top picture as I only had SMD 0603 on hand; look carefully :)

On the first attempt, I used the great ESPHome project to simulate pressing the pushbuttons. I just created 3 virtual switches as a proof of concept but for correct integration, a cover component can be used.
I split the configuration into two files: one generic and the other only specifying the shutter name (room) and timings.

Per device file, called shutters-office.yaml in this example:

Then the generic file called shutters-common.yaml:

As there is no feedback information on the shutter state the “slightly opened” state is achieved by fully closing the shutter then opening it for a small amount of time.
Once the ESP8266 or ESP32 is flashed the only thing remaining is to add it to Home-Assistant, thanks to Configuration => Integrations => Set up a new integration => Search for ESPHome => enter the ESP IP address. Et voilà, you are good to go and create powerful automations in Home-Assistant.

On the next version, I used a more clever strategy to command shutters from 0 to 100%, and a LoRaWAN board to allow battery-powered operation - to be published soon.