Here is the status of the project, right now it is not a real home automation as I only monitor things, but control will be added soon.

All sensors emits to the gateway, which is just a sensor with the radio chip in reception mode. I use a Raspberry PI to collect and parse data from the gateway, then store it in the rPI and online. All data are displayed on Grafana for now and some are send to my phone by push messages.

I made custom PCB with ATmega328+HopeRF RFM69 radio transmitter, the Arduino bootloader is used in order to have easy access to thousands of libraries.

First batch had three minor errors which are hopefully corrected in the second batch. I should receive them soon, for reference there were:

Following batchs where corrected, see this page for schematics and layout. 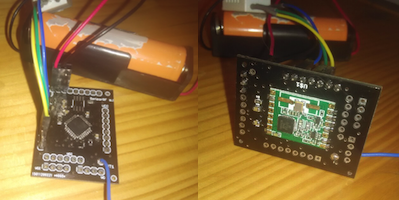 Currently I implemented those sensors:

I use Node-Red to receive serial data from the gateway on the rPi and parse it, check data integrity, gather data from web services (like air pollution), get the “end of print” data from my 3D printer… It is a great tool to quickly add new functionalities. 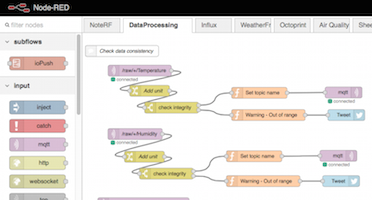 I use InfluxDB, a new noSQL database dedicated for time series data. Even if it still a bit buggy, it is now usable and the team reacts fast to issues. Data are stored in local on the rPi and send to a server on the internet in order to have a backup.

I did not find the ideal tool yet and do to want to write it for now, so I am using Grafana to display and graph data. I might move to something else later if I find, OpenHAB 2.0 is a good candidate but nothing is defined.

I quickly designed a 3D printed box but I am not happy with it because it is way too big, so I might try another design. Algouth I might change the batteries because 18650 elements are free, but big. 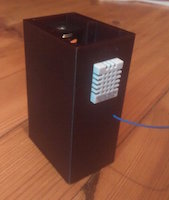 I power several sensors on upcycled 18650 batteries from old laptops since one year. So I optimised power consumption in design and code, but never measured it because sensors consumed only few percentage of the 2 400 mAh batteries.

All blog posts associated to NoteRF