We designed a 3D printer in Grenoble’s Hackerspace (France), which works really well thanks to its stiffness. Nevertheless, I had some troubles regarding PLA humidity: there are bubbles at the nozzle outlet when it absorbs too much moisture. So I found that:

For most people, keeping the PLA in a sealed box when not in use + drying it from time to time is enough. But I found that Colorfabb PLA is absorbing moisture in 3 or 4 days in my office when loaded on the printer, also, I think that it can have long term effects on PLA to dry it too many times in the oven.
So I investigate how to keep it dry, and if my storage box is really sealed; I used my sensors from NoteRF project.

The next step is to make a box to keep it dry while used, but this storage with desorption significantly reduce my problems, and my PLA is currently stored at 17.5% RH (20°C) : 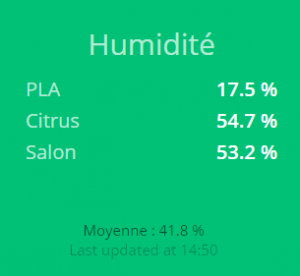 To hold the silica, I designed a customizable box in OpenSCAD, available on Thingiverse. 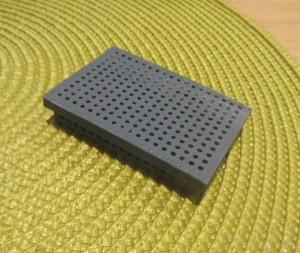